Back To School: Education Throughout The Ages

Ding dong readers! Is that a school bell I hear? It’s Back To School time once again!

It’s the one and only President of The Past, Professor Quantum here! I must say, I am positively invigorated by the thought of millions of marvelous minds returning to the classroom, noggins fresh and eyes alert, ready to absorb the wisdom of a thousand generations that came before…

So I figured, what better time is there to take a look at the history of schooling?

Quiet on the back row there, I’ll have no tittering in class.

Ancient Greece is often considered to be the home of many of our modern academic disciplines, but their method of education was quite different to ours.

It’s true that some of the earliest schools were in the Greek city-states, but they operated under very different systems. For a start, there was no mandatory, public schooling, although in some city states boys would be given a few years of military training, which is a kind of education, I suppose. Secondly, the education that did exist was almost exclusively for boys.

What we would consider ‘schools’ were all private, meaning that the state had no role in controlling or maintaining them, and they simply charged fees and taught whatever they decided they should teach. As well as basic literacy, these schools typically offered subjects such as poetry, drama and history, as well as what we call ‘physical education’ subjects such as athletics and wrestling.

Parents would choose a school based on the monthly cost and the subjects they offered. It was certainly a simpler system, and rather entrepreneurial, but unfortunately this meant that only the children of wealthier parents would receive an education.

Of course, there was an exception to this trend. The good old Spartans (you know the chaps, they’re the ones from the movie ‘300’ who ran about fighting in capes and underwear) didn’t have schools. At all.

Instead, boys were taken from their parents at the age of 7 to live in a military-style dormitory/barracks, where they were taught to fight and erm… well that’s it really.

Of course, almost none of them could read, but who had time for books? They had wars to win and six-packs to maintain.

Leonidas cares nothing for your puny books!

The Roman education system that developed has a little more in common with our own, though it differed in many other ways. Like the Greeks, there wasn’t really any free public education to speak of, and schools operated on a fee-paying basis, again leaving the children of the poor without the opportunity for education.

However, unlike Greece, Roman schools usually taught girls as well as boys, though the classes may well have been separate.

Whereas Greek schools tended to be structured more loosely, teaching children whatever it was that they taught at whatever age the student enrolled, Roman schools were arranged in a tier system, with students progressing from simpler to more advanced levels of education. This is similar to our own system of primary schools and secondary schools with pupils arranged in numbered grades, although for Romans progression from one tier to the next was generally based on ability rather than age.

Like us, the Romans were keen on starting education early, as their famous educator Quintilian noted that young children were particularly good at learning and remembering.

Ultimately though, public schools weren’t the done thing in Roman times, so most kids went without the crucial sustenance of knowledge. 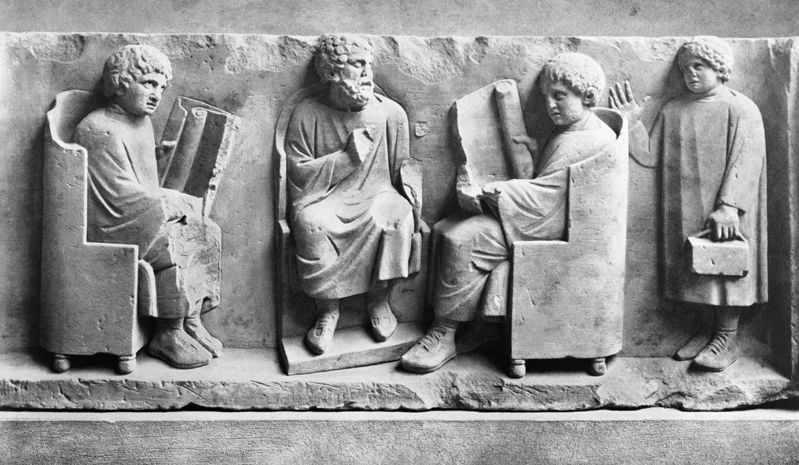 A Roman teacher and his three pupils. The child on the right seems to have brought a little Roman lunchbox with him.

Britain Throughout The Ages

Schools, in one form or another, have existed in Britain for quite a while, though they were rarely a popular choice for children.

In the Middle Ages, schools existed for teaching Latin grammar, though education for youngsters generally came in the form of apprenticeships.

Perhaps the earliest examples we see of free public education is during the reign of the Tudor King Edward VI.

Instituting a system of free grammar schools, Edward did in fact make education free and open to all children. However, this schooling was not mandatory like it is today, and in practice most poor children were not able to go to school because they were needed to work at home.

Our system of mandatory schooling for all children is actually quite a young one, when you consider that schools of some form or another have existed for well over 2000 years. Compulsory education didn’t come in until the Elementary Education Act of 1880, and even then the allowed leaving age was 13, with several ways to get around this restriction. Many children left school before 13 to go into employment, which we talked about last time

You know 21st century Britons, I have to say, I don’t think very much of your education policy. Oh sure, you’ve got everybody in the system scribbling away, but the kids today wouldn’t last a second in my time.

They know English, and sometimes a little French, but they can’t speak a lick of High Galactic Common Speech, which is essential to getting by in the future! And your science and mathematics is lagging too; I saw a pair of Year 7s struggling with Pythagoras’ Theorem the other day. Ha! Knowing your Pythagoras is key to mastering quantum bivariable hyperkinetic cosmo-engineering, which is a core subject for kids in the year 2744!

Sometimes I do despair. So kids, I’ll just say this: You’d better pull your socks up if you want to stop lagging behind your 28th century counterparts.