What do you mean you don’t know what a hagfish is? They’re one of the most well-known living fossils!

“Quanto’s lost it, he thinks the fossils are alive”

I know what you’re thinking. “Quanto, you’ve done it now. Your complete disregard for the dangers of frequent exposure to timestream radiation have finally eroded your mind”.

Well firstly… you may have a point.

But look here you rapscallion, I didn’t invent the term ‘living fossil’; it’s totally a thing.

A living fossil is essentially a species alive today that has not really changed its genetics for a long, long time.
With most species, if you give them about 2 or 3 million years and then have a look at them, they look completely different, if they even still exist.

However, some of the animals on this list look the same as they did over 500 million years ago! That’s why they’re considered a living fossil; their very existence is like a glimpse into the past, a peek at how creatures looked hundreds of millions of years ago.

Because their DNA is so old, species considered living fossils often have no close living relatives, kind of like if a dinosaur existed today (although actually, many of these creatures are far older than the dinosaurs).

So here are my favourite living fossils, starting with Mr I-get-a-special-day-named-after-me, the hagfish.

I promise you I’ve made none of these creatures up. 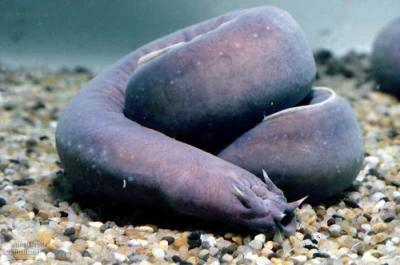 A kind of unholy ocean worm, the hagfish is a very interesting, if terrifying beast.

They’re particularly odd in that they have a skull, but no spinal column, meaning they’re kind-of-but-not-really vertebrates.

And it’s not just their looks that will turn your stomach. In what’s most likely a defence mechanism, hagfish have the ability to release up to 20 litres of sticky, slimy goo. If they’re caught by a predator, the slipperiness of the slime can help them slide free, and the slime itself is thought to act as a distraction.

Most interestingly though, the slime is also thought to protect the hagfish by clogging the gills of predator fish, preventing them from breathing and forcing them to run away from the hagfish so that they don’t drown.

Amazingly, hagfish today are pretty much the same as hagfish from 300 million years ago, although when you consider how effective its defence mechanism seems to be, perhaps that’s not so surprising. 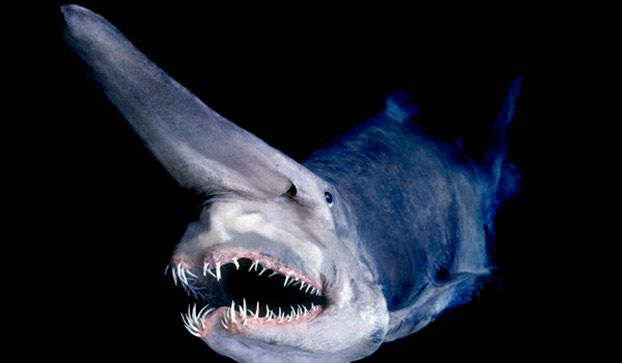 Gah! What mockery of life is this?

I’ve battled barbarian space slugs that weren’t half as terrifying as this next entry.

The goblin shark evolved from an ancient species of goblin which were interbred with sharks way back in the Tolkieanic period (that’s a joke, goblins don’t emerge until well after the 30th century).

In actual fact, this unsightly creature is the last survivor of the Mitsukurinidae family, meaning the species is around 125 million years old, and these fearsome brutes certainly look their age.

When it bites its prey, the goblin shark’s entire jaw shoots out to grab hold of its prey like a terrible toothy hand. This, along with the strange, sword-like snout makes the goblin shark nightmarish to behold, but who knows, maybe it’s just misunderstood.

Looking like a sub-aquatic mantlepiece ornament, the nautilus bobs around the ocean without any sort of flippers for propulsion. Instead, the funny little shell-dweller uses a clever kind of jet propulsion.

Drawing water into its shell, the nautilus then shoots it back out to propel itself around, so as well as being a living fossil and an underwater ornament, it’s also sort of like an organic speedboat.

Though typically having a lifespan of about 20 years, the genome of the nautilus has barely changed in around 500 million years.

And finally, we have the horseshoe crab, or as I like to call it, the “upside-down sea-floor spaceship”.

This funny fella actually likes to swim mostly upside down, but is usually found scuttling along the ocean floor for food.

And perhaps it’s just me, but I’ve always thought there’s something noble about these funny little crabs, but maybe that’s because they are literally blue-blooded.

But however odd this upside-down swimming blue-blooded chap may seem, he must be doing something right because horseshoe crabs have existed for around 450 million years!

So, all of these creatures are hundreds of millions of years old, now tell me living fossils don’t exist.

It does make you wonder though, will humans ever be living fossils? We’re not nearly that old yet, but I personally have high hopes for us as a species.

I’d love to jump forward in time to check, but there are still limits to my time travel technology. I’m working on fixing it, but currently if I try to go much further than the 77th century, time seems to just fling me way back into the past like a rubber band that’s been stretched too far…

Anyway, I’d love to stay and chat but it’s time for my aubergine.