It’s the Titan Temporal here again, and boy have I got a wheelie good feature for you today!

Today is National Cycle To Work Day, so I’ve spent the past few days pedalling back through the timeline, following the story of the humble bicycle and compiling this time-travel verified guide to its noble history.

So take your protein pills and strap those helmets on readers! Let’s take a ride back through time!

Seriously though wear a helmet.

The Velocipede: Half bike, half treadmill.

One of the earliest examples of two-wheeled transportation comes in the form of the ‘velocipede’.

This early bicycle had no pedals, and the rider perched, rather than sat, in between the wheels and just sort of… ran for it.

Want to see what that looked like? Of course you do! 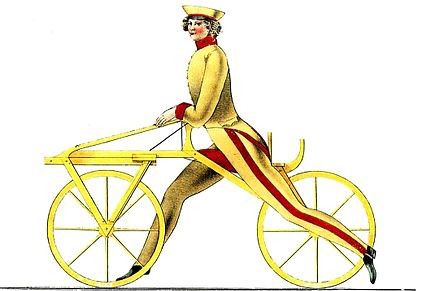 The clothing and the freakishly long, muscular legs were the style at the time.

The earliest velocipede, developed in 1817, was called the ‘draisine’. It was named for its creator, the German Baron Karl von Drais, who considered it a ‘running machine’.

It’s an interesting little contraption, ingenious in its own way, but ultimately it’s less of a bicycle and more of a turbo Zimmer-frame.

It does also tend to remind one of this…

Was The Flintstones’ car really the first veolcipide?

The Bone-Shakers: Uncomfortable and bad at cornering, but with an awesome name.

Many years passed, and history flirted with various forms of tricycle and quadracycle, though nothing really stuck in a big way.

Bicycles, in a form that would be recognisable to you today, really started kicking off around the 1860s.

There’s some debate as to who the design originally belongs to, but it boils down to this: some bright spark in France bolted some pedals onto the front wheels, and the bicycle world exploded.

Not quite as intimidating as the name suggests, is it?

Competing designs and patents began to emerge across England, France and the US. Like a modern bike, these ‘vélocipède à pédales’ had two medium wheels with a seat in the middle.

However, with the pedals being attached to the front wheel, the steering was seriously impaired, which made cycling rather a clunky affair.

Also, the primitive frames and iron-banded tires weren’t really built with user-comfort in mind, and in England and America these early bikes were commonly referred to as ‘bone-shakers’. I used to wrestle under the name ‘bone-shaker’ in the intergalactic wrestling league of 2886. That has little to do with bicycles honestly, but I didn’t think I’d get another chance to mention it.

The Pennyfarthing: The best worst idea ever.

Here’s the one you’ve been waiting for!

When you think ‘old-school bicycle’, you think ‘penny-farthing’. It’s salt and pepper.

If you haven’t heard of the pennyfarthing before, it was essentially a bike with a comically large front wheel that the rider would sit atop, almost like a giant unicycle with a stabilising back wheel.

The enlarged front wheel allowed for much higher top speeds, though the design was inherently unsafe. Still, the penny-farthing became very popular with young, adventurous men during the 1870s.

Even though the penny-farthing was relatively short-lived, with other designs coming into popularity in following decades, the penny-farthing has made a real mark on pop culture. Something about the image of a dandy gent seated atop a giant front wheel has just always clicked with people, and the high-wheeled bicycle has become emblematic of ‘the olden days’. 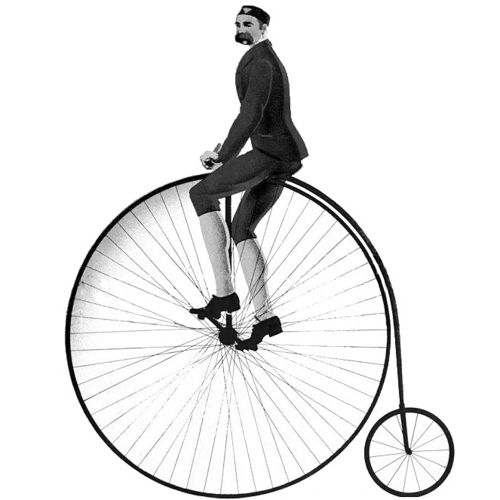 The Safety Bicycle: Twice the practicality of the pennyfarthing, but with half the style…

With the invention of the ‘safety bicycle’ in the 1880s, cycling became accessible to a much wider group of people.

This category of bikes was much closer to the bicycle you’re most familiar with in your time. With equally sized wheels, a rear-wheel chain drive, and the newly invented pneumatic tire, these bikes were far more manoeuvrable and comfortable to ride than any that had come before. As an added benefit, they didn’t require the rider to risk life and limb by perching preposterously high in the air too.

This led to a surge in popularity, and by the 1890s many Europeans and North Americans were bicycle owners. For the first time, women began to cycle in large numbers, which in those days gave them an unheard of level of freedom.

The bicycle also led to change in fashion for women, with new types of dress appearing that made cycling possible.

Bicycle face? You’ve got to be joking…

Now readers, this is where I’d like to take a moment to talk about one of the more absurd aspects of biking history.

In the 19th century, the notion of women cycling and having the independence to go wherever they wanted to was… troubling to a lot of the traditionalists of the era.

So, they sat down and had a jolly good thinking about equality, human rights and their prejudices, and in the end they moved past their archaic point of view and decided that an invention that gave people greater freedom to get around was a good thing.

Just kidding. They told women that cycling would permanently damage them and give them a condition called ‘Bicycle Face’.

Doctors said that the constant strain needed to keep a bicycle steady would lead to women getting permanently contorted faces. They also, somehow, convinced people that cycling would give women tuberculosis.

I mean really humans. Speaking as someone who spends quite a bit of time as a woman (I have some advanced gender reconfigurement technology, that’s why you’ll sometimes see me as a woman when guiding the Time Tour), I have to say this was a pretty poor show.

Fortunately though, by the mid 1890s, the world came to its senses, and the popularity of cycling skyrocketed among both men and women.

Today’s bicycle and beyond!

The invention of the safety bicycle was really the last big change for bikes as a whole. Over the past 100 years, improvements and alterations have been made, such as the invention of gears, but the core design of the bicycle has remained the same.

But I know why you read my history pieces readers. You want a little glimpse into what the future holds don’t you?

Well, as you know, I never like to give too much away. But let’s just say that when everyone in society has super-strong robot legs, a version of the velocipede makes an inevitable comeback.

So readers, whilst you’ve still got some of the summer sunshine left, get out there and get on yer’ bike!