From my last trip when I visited a babe-in-arms, I’m now off to watch some football. I bet you didn’t think I’d be interested in such a frivolous game but there’s a lot you don’t yet know about me. For example, did you know I love plantain and devilled egg sandwiches? That’s a story for another time, however.

Having been present at the birth of football itself, I like to keep my foot in and watch the big games every now and then. Did you know that the first football was made from a pig’s bladder? Eurgh! I dread to think what the state of the sport would be now if we still used poor Percy’s insides today – there would probably be illicit underground games attended by sadistic butchers and Sweeney Todd alike. But as the saying goes, what goes on at Pig Club, stays at Pig Club. Thank goodness.

Now I don’t like to brag, but it’s safe to say that the FA Cup was a pretty good idea of mine. After all, it’s the longest running football competition in the world and everybody loves it. Everybody. The competition is hard to predict and the big shocks that have happened are actually called ‘Giant Killings’. You might think that’s a funny name for them but let me assure you, I’ve been present at a few Giant battles myself and there’s nothing funny about nearly getting squished by an enormous, 100ft lady named Hilda. She actually turned out to be quite lovely by the way. I’ll let you know if love blossoms, of course..

37-year-old Midfielder Mickey Thomas proved that age is but a number as he helped dump George Graham’s then defending champions, Arsenal, out of the FA Cup and on to their… bottoms!

Led by a young, fiery-haired Harry Redknapp, Third Division Bournemouth caused a shock when they scored two goals in five minutes to remove Manchester United from the tournament. It may have had something to do with an experiment of mine where I replaced some of the balls with a homing-ball designed to fly into goals at the lightest touch. That’s our little secret though. 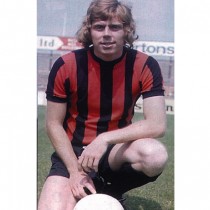 When the First Division was the premier football league in the country, big fish Coventry were sat comfortably in it and didn’t expect anything other than a routine victory as they faced Conference League minnows, Sutton. Three goals later and Coventry were well and truly out of the pond and into deep water. I didn’t even replace the ball that time!

There’s something truly fantastic about scoring a goal; watching the ball obey the laws of science and spin through the air in direct relation to the aim and power of one’s foot. Even if said ball has been scientifically modified beyond recognition. Ahem.

I don’t think the Hyde supporters found it as fantastic while they watched Preston North End’s 26-0 drubbing of their team in the 1888 Giant Slaughter.  They just need to be patient; 2316 will be a veritable goal-fest for them. Let’s leave them in suspense though. Don’t want to spoil the surprise now, do we.

I do, of course, know the outcome of this year’s FA Cup Final between Arsenal v Aston Villa on 30 May 2015 but I can’t tell you – the bookies would be VERY cross with me. I’m bound by the laws of time travel not to reveal any events that would lose the bookies more than £1,000,000,000,000 so you’ll have to make do with this hint – it’ll probably be who you think it might be.