On your marks, get set… it’s time for Royal Ascot

Hello London explorers! I’ve just got back from having tea with a friend in1711, which, coincidentally is the year Queen Anne ordered a racecourse to be built on Ascot Heath. Why is that coincidental? Well, it’s the day of Royal Ascot, of course. What’s Royal Ascot? Oh my… Alright, forget the preamble, just get in my London Time Tour Bus and put your seatbelt on.

Welcome to August 11th, 1711, the date Queen Anne’s royal racecourse was officially opened. It’s also the date where I tried skinny-dipping in the Thames for the first time. Ahem. Queen Anne loved horses, racing and hunting, so it was only natural that, whilst taking an outing one afternoon she realised that Ascot Heath was the ideal location for a racecourse. Ah, the powers of a Queen… to snap one’s fingers and voila, a palace; a thousand swans; a time-travelling scientist thrown into the river with no clothes on; a racecourse, etc.

The course’s final event was ‘Her Majesty’s Plate’, which was valued at 100 guineas – something most people probably could have lived on for a year or more in those days! The horses themselves had to be ‘over six years of age and were required to carry a weight of 12 stone across three heats of four miles each.’ This proves two things; that those horses had endurance, and jockeys were much bigger in the 18th century.

Back in 2015, Ascot is still owned by the Crown and Anne’s tribute to genteel society is still going strong with the first race every year still called the Queen Anne Stakes. Over time, various monarchs added their stamp to Royal Ascot including Edward VII, George V and even Queen Mary (I’ll bet on that race being particularly bloody…).

No cup or event, however, can match up to the famed Ladies Day, where all of the ladies (and some of the men) try to out-do each other in a battle of headgear. Ooh, just those words are enough to make me shiver with cold… probably something to do with the fact that the last time I commented on a particular Baroness’ hat I was thrown in to the river without any clothes on. Have I already mentioned that? 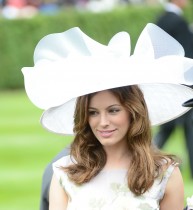 Anywho, let’s get back shall we?

Ahh, we’re home; thanks for coming along. I hope you’re feeling more suitably educated about Royal Ascot now? Good. Wait, where are you going? I thought you might accompany me to Jupiter? It gets a bit lonely there. Not a fan of gas giants? How about bringing the family along for a tour of London instead?